There are really just 3 ways to store bicycles in a garage (other than having them all leant up against each other):

In the roof - hoist them into the ceiling space

If you have all your bicycles leaning up against each other they will inevitably get scratched and damaged and you won't be able to get to the ones in the middle or at the back. Given that some bicycles cost thousands of pounds it's worth finding a better way to store bicycles in your garage.

Storing bicycles in the garage on a floor standing bicycle rack is a good start but there are a couple of problems. Firstly you will use up a lot of valuable floor space. As you stack the bicycles side by side you will find the handlebars force you to store them 500mm to 800mm apart. Three or four bicycles can easily take up 3 metres by 2 metres of space on the floor. You might also find that, because you slide the front wheel into a slot, some tyres are too fat to fit in the slot and others are too narrow so the bicycle falls over to one side.

Hoisting bicycles into the ceiling space in your garage isn’t a bad idea as long as they are light bicycles. With mountain bikes weighing around 20Kg and some e-bikes weighing upwards of 30Kg that can become more of a problem. Depending on the structure of your garage roof, and the fixings you use, you might find that the bicycles are not secure and could all come crashing down onto your car or onto you!

Hanging bicycles on the wall in the garage can be one of the best ways to store bicycles and save space in the garage. When bicycles are stored vertically, hanging by the front wheel, they take up much less floor space.

What is the best way to hang bicycles in the garage?

Horizontal storage keeps the bicycles closer to the wall but uses a lot of wall space. The GearHooks BRZ does this but, since it holds the bicycle by the top tube, it’s really only suitable for road or gravel bikes. The hooks fold flat against the wall when the bicycle is lifted off. You can mount two of them one above the other to make more use of the wall space. It’s probably better for most people to store bicycles in the garage hanging vertically by the front wheel. This gets the most bicycles in the smallest space. Some people worry that hanging bicycles by the front wheel in a garage is not good for the bicycle, but it’s actually fine. Most bicycle shops store bicycles hanging by the front wheel. The rim will be protected by a rubber coating on the hook, suspension forks benefit from being stored vertically (it keeps the seals lubricated) and if hydraulic brakes go a bit spongy it’s because they need bleeding (but a couple of pulls on the brake levers will sort it out anyway).

How can I hang one bicycle on the garage wall?

The cheapest and simplest option to hang one bicycle on the wall in the garage is with a single bicycle hook or garage wall mount. There are lots and lots of these on the market and they all do a similar job. The only thing to consider is that some bicycle wall mounts and hooks need fixing with 3 or 4 screws. It can be a bit of a challenge to get the holes lined up.

Our GearHooks B1 bicycle hook is the only one that mounts with a single heavy duty fixing, which makes it much easier to fit. The hex bolt will screw directly into wooden battens in a shed or behind plasterboard in a garage wall. It also comes with a heavy duty Nylon insert for solid walls. All you need to do is drill one 5mm hole in wood or one 8mm hole in brick, block or concrete walls.

What’s the cheapest way to hang 2 bicycles on a wall?

Lots of people have two bicycles like a road bike and a mountain bike. Couples who cycle will also have at least 2 bicycles so a cheap way to hang two bicycles on the garage wall is going to be popular. The simplest way is to just buy two bicycle hooks but if each one needs 4 holes to fix it to the wall that’s going to a lot of drilling and lots of chances to get it wrong.

The GearHooks B2 is a double bicycle hook that fits with just one hole. It uses a heavy duty hex bolt and a nylon wall fixing to make sure it’s properly attached to the wall. It will easily take a couple of road bicycles and even heavier bicycles like ebikes and mountain bikes (but we recommend fixing the hook so heavy bicycles have their back wheel on the ground - just to avoid having to lift them (see below)).

Can I hang a bicycle and my gear on wall hooks?

Storing a bicycle on the garage wall is one thing but what about your helmet, camelback and maybe your coat? The GearHooks B1+ is a bicycle hook with an extra prong that will allow you to hang your helmet and other things like a rucksack and a coat on the garage wall next to your bicycle.

How to hang a heavy bicycle, like an electric bicycle, on the wall

The difficulty in hanging an ebike on the wall in your garage is its weight. They are tough to lift and hard to get vertical (onto the back wheel) unless you know how. Our bicycle hooks will allow an e-bike, or any heavy bicycle, to be stored in the garage vertically on the wall without needing to lift it. They will hold the bicycle vertically with the back wheel still on the ground.

The trick is to get the bicycle up on its back wheel and hook  the front wheel by following these steps:

There is a short video here to show an ebike being stored on a wall using this method.

How to hang 3, 4 or more bicycles on the garage wall

A wall mounted bicycle rack will allow you to hang several bicycles on one rail or track. The rail will allow several bicycle hooks to be fitted anywhere on the rail so you can easily add or move hooks without drilling any more holes. If you mount the rack high on the wall the bicycles will hang clear of the floor for easy cleaning. If you have heavy bicycles, you can mount it so the back wheels remain on the floor.

One of the things to consider is how many bicycles you can practically fit on a rack. How to hang the most bicycles on the garage wall

If you mount several bicycles too close together their handlebars will overlap and they become difficult and frustrating to put away and get out again.

The key is to get the handlebars properly spaced. For road bikes you will need about 450 - 600mm between them. More space will be needed for mountain bikes. If you have more than a couple of bicycles and they are all in a row, you will use all the available wall space really quickly.

An alternative is to get the handlebars away from each other.There are a few ways to make this easier; - mount them in a V shape so the handle bars overlap Many wall mounted bicycle racks show bicycles stacked really close together (usually with some bicycles upside down) which looks as though it saves loads of space but is often impractical for heavier bicycles. Trying to wrestle a heavy bicycle off a wall mounted bike hook, whilst getting the handlebars and pedals of the bicycles next to it tangled up, can be very frustrating. It’s better to think of an alternative.

So that hopefully explains the best ways to store bicycles in a garage. If you have any questions please get in touch and we will try to help.

Garage Wall Storage ideas - How to hang sports gear and tools on the garage wall
15 January, 2023

How to Spring clean, declutter and tidy your home, garage or shed with GearHooks
22 February, 2022

Really helpful instructions. Well made and thought through. Would buy again if I had more bikes!

I’m very pleased with my bike hooks and the service provided.

Simple to assemble, 4 bikes neatly stored in the garage. 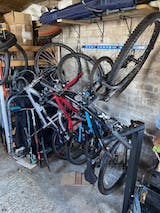 Spent a while searching for good storage solutions for my climbing and mountaineering equipment, and I'm so pleased I discovered GearHooks! Clear and easy installation instructions, very high quality product. Would definitely buy another one if needed and have already recommended to friends. Glad to support a local and sustainable business.

Really good service. Arrived quickly. Haven’t actually installed them yet but looks easy enough for even us very non-diy’ers to achieve.

I used this to hang my 1986 Bianchi on the wall and it looks great - the slim lines of the hook match the slim steel frame. It's great value too

These gear hooks have made a massive difference for storage of acoustic guitars and basses in our colleges music store room. The price point is not cheap but this is a study, well made and stylish product will a lifetime warranty, well worth the money.

Simple and Adjustable, no faffing around with mounting individual hooks and positioning

Purchased this for my workplace to tidy up a tool bin. I was very impressed with the sturdy design and clear instructions that came with it
and found it straightforward to fit. The customer service from Luis made all the difference as he advised which product would be best and couldn't have been more helpful. You just don't get that when you order something made in China and sold by Amazon. 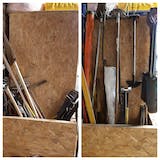